Hello all you pflwellians! I know how much you’ve all been needing your fill of pflw news so here it is:

What’s that I smell? *sniff sniff* Is it bacon? No. It’s a new Poor Folks, Live Well EP and it’s on the horizon. We’ve been chipping away at it for the past month and things are beginning to take shape. The sun’s rising again and we can’t wait to provide some new music for the musicless (So many new words today!). We’re set to put this new 5-song EP* out in June and I’ve got very high hopes for this new project. We learned a LOT from the last one  and I think we’re set for something sickmegawesome (Q: is sickmegawesome the new EP title? A: No. That’d be lame).

In other news, happy birthday Bob Mackie! We got to play a celebration gig with Jip Sea Party and Bad Juju at Mission Ridge this weekend and had a great time. Thanks to Snatchee Records for being so great and to Bob for choosing us among three to help him bring in his new year!

Something to ponder for the day: Karaoke.

Got a few more items coming up. We may not be updating these webbins much but we’re still going strong. And we’re feeling great about these upcoming projects!

*SL=Single, EP=Extended Play, LP=Long Play. Keep in mind, people used to buy a lot more singles in the previous days of vinyl. Extended play is between a single and an LP. … In case you were wondering.

Hello there folks! We’ve missed you all. Feels like it’s been a little while (probably because it has…).

Just so you know, Ravenna Woods is fantastic. As you can see HERE and HERE and Caffe Mela was fortunate and cunning enough to book them for a show on January 14th. KUDOS to those who made that decision. And what’s more, this will be a chance to be able to bring your PARENTS and UNCLES and COUSINS to see POOR FOLKS, LIVE WELL! Woot? Purchase your $5 tix for the event HERE.

Now for a current status of the band: Shawn’s in Seattle, Brian’s working way too much, and Carsin’s taken to believing he’s a German foreign exchange student in his own hometown. Seems like he’s always doing homework and asking for help with his English… Suffice it to say, we’re kinda scattered at the moment but plans for a new EP are in the works. And ideas still keep coming.

In the meantime, in case our album doesn’t release before it, the new Nicki Minaj album is coming out in February. That oughta tie you over.

Thanks for giving us the love and acceptance we crave, folks. Warm Gestures to you and yours.
-Brian

Doin laundry. What better time to post something about a rock band than while sitting and waiting for your delicates to stop rotating in their forced motion and finally be ready to be taken out and folded gently into piles? Answer: there is absolutely no better time.

So, when was the last update? *checking back* Okay, yeah, it’s been a little while. First off, thank you to all who came with us to Pullman for the Vendetta Red show! Turned out awesome and we couldn’t have done it without the company.

Also, the Clearwater show was EXACTLY what we needed! Thank you all for making that one so fun. Special thanks to MOTHRA. I’m very stoked* about that band.

I guess, since this is supposed to be a place of “band updates” and such, I probably should say that in a sudden turn of events, Shawn moved to Seattle last week leaving us in a bit of a limbo. We all are still trying to figure out what that all entails. We’ll definitely keep everyone posted but for now we’re going into a sort of “hiatus.” Whatever that means, that’s what we’re doing. But don’t worry, we’ll be back.

We’ll remind you before the date, but the last concert booked is at the The Hurricane Lounge on October 15th with a band called Lucero.

I’ll leave everyone with a treat this time. And I’ll try to update again soon.

We’re back with a new post! I know that so many people were wondering what the heck has been up. It’s been a few weeks since the last update. Well, it happened like this:

So, Brian’s just been up in the hills a lot.

But he’s back. And he’s taken to writing in third person.

Information worth reading: We’ve got a show coming up! Come to 10 Below (underneath The Applewood Grill) on July 30th @ 8:00! You know you want to.

More info: We’ve also got a show coming up at Der Hinterhof in Leavenworth! August 6th @ 7:00. We played there last year and we’re stoked to be back. That’s a really fun place to play.

Some other new info that most of you already know is that we’re now on Twitter! Carsin’s taken that over and I’m sure at least 30 times a day you’ll see a new update on all the important info regarding Poor Folks. Just search for PoorFolksMusic.

I’ll leave you with a chart I may or may not have made on Microsoft Paint: 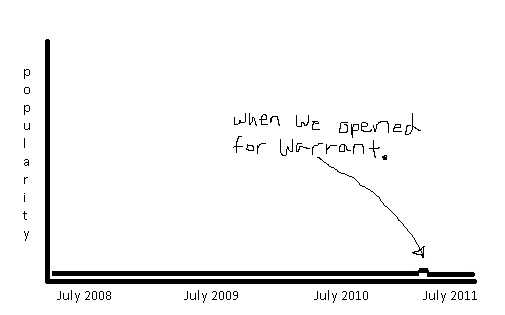 Conclusion from all this data: We have a ways to go before we are as famous as Bill Clinton.

Have a wonderful day everyone! May the wind be at your back and may angels sing sweetly into your ears. Warm Gestures.
-Brian

I’m just going to say this: “I’m not just going to write out a blog every time you feel hungry to read some meaty piece of literature!” I just said that out loud while I wrote that. Hence the quotations.

No new band news. I won’t lie to you. I mean, I guess there’s probably something to talk about… But Shawn’s new rash and Carsin’s new leotard won’t really serve as great topics for a monologue. So I’ll just regale you with stuff.

So, the Internet seems to be sticking. Not just a passing fad. I guess I lost that bet.

Along those same lines, people seem to be definitely more interested in Lady GaGa and Katy Perry than they were twenty years ago. … I guess this is what they call “progression.”

I dunno… The thing is, now that Lady GaGa and Katy Perry are named on this blog, this page is going to get 700 views. Should that bother me?

There’s a part of me that worries over the idea that Nerf bought the rights to Laser Tag. It’s not that I don’t trust Nerf. It’s just that all the friends that I grew up with named Nerf turned out to be Jerks. That might have something or everything to do with it.

I couldn’t help but overhear an old lady talk about how she accidentally let a bird into her house today. She talked about how she chased it around while it flew from room to room. It went into the laundry room, bathroom, and kitchen, but never made it into the bedroom. The whole time I listened to her and pitied her gullible friends. Call it a gut feeling, but she lied.

My sunburn hurts when people slap it.

I’m pretty sure that potters are hurting when you can get a perfectly decent mug from Wal-Mart for $.79. And I’m pretty sure that tailors are hurting when Target sells shirts for $8. I could get a plane ticket from here to DC for under a hundred dollars? I can get coffee, one of the most time-consuming processed, middle-man plagued goods for $5/lb? And what’s this about a complete  burger with the works from Jack in the Box for $1.25?… For many different reasons, these things should never be this cheap.

But then an ER bill is $700 just to walk in the door? Cell phones cost at least $70 every month no matter how you spring it? Movie theaters are making a killing on popcorn. And a lot of the reason why cigarettes are so expensive is taxes… And why does everything that I purchase right now, whatever the cost, seem to want to fall apart almost instantly?

Yesterday I got the date of the Battle at the Alamo tattooed on my arm. Right under the date for the next Halley’s Comet. I’d hate to forget these things.

Let me start with this: THANK YOU BIKERS! We had a great time Saturday the 11th at the Kids to the Capitol” Bike Rally. I sure hope we got those kids to the Capitol. All I can say is that I hope that this “Capitol” they’re speaking of is Washington DC. I’m pretty sure I’d feel a bit gypped if we’re talking about Olympia here…

And we gotta say, thank you to the Vogue for having us back on Friday the 3rd. It had been a full two years since we played there last (almost exactly, actually. We noticed the previous concert poster on their wall and it said June 6th, 2009) and I’m pretty sure we’ve gotten a lot louder than we were then. But the staff was great and people were very responsive. We appreciated that. 🙂 Only a few people left holding their ears. … Only a few.

For our next album we’ve decided to go with a nautical theme. And we’ll have scratch-and sniff pages so you’ll be able to smell the coral and shrimp! Once science enables us to get these complex scents onto paper, it’ll be time to hit the studio!

So, gotta sneak this in, for those of you who have lived past 21 years of age, be sure to check out the new Columbia Valley Brewery in Wenatchee. At the end of 5th St and to the left about a hundred feet, just off the loop trail by the river lies a fantastic new spot for you “adults.” And for now, pints are only $3.50 a piece. We’re shooting to play the Grand Opening there (although it’s hardly official yet). Look for it!

And finally, some choice bits from the Ghetto Glossary:

You’re coming to the Vogue in Chelan, right? Only about a half hour from Wenatchee. And we’ll be playing pretty much EVERYTHING.

So, it’s been a restful week. We had a jam yesterday at around Miller time and came up with a few new ideas. And Shawn spat some “mad game” at Carsin’s lady. And we griped about work. And we were way too loud past noise curfew. All the while just trying to figure out what the heck the next step is… New album? Radio promotion? A bunch of small things at once?

One thing’s for sure, we really are jonesing to get out of town again… This Chelan will be awesome and it gives us something to really look forward to. But I want to DRIVE! You know? I think another Seattle/Boise/Portland gig is in order. Heck, maybe Los Angeles or Texas or something… We’ll see what happens.

Geez. I need a freaking Kit-Kat for my brain. What is it in the stars, you know? Direction. I just need a little direction.

So, earlier I was updating the Sonicbids account and the ever elusive question came up. The question of “genre.” I really want to put that to rest. If the muse moves you, comment on our facebook how you would classify us. Put our sound into a box. Are we Rock? Pop? Country? Hardcore? Thrash Electro Disco Funk?

And actually, while we’re on the subject, what other bands do we remind you of? I wanna check them out.

Anyway, I’m gonna leave you with substance. Foals, And So I Watch You From Afar, Biffy Clyro, &U&I, Hold Your Horse Is… These bands are some of our current inspirations.